Mathematics N2-Word problem that confused me 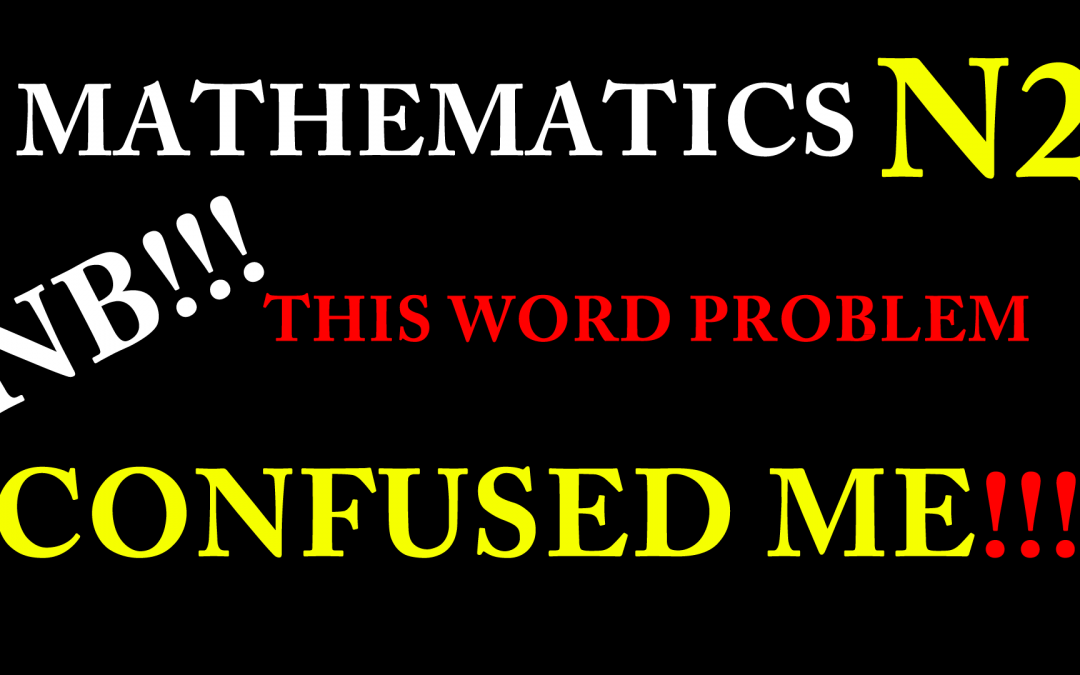 Mathematics at times can be tricky and challenging. One such area where mental strength is important when it comes to algebra is solving word problems. By word problems we mean the type of Math that involves a story where you need to convert the given lines (words) into mathematical equations.

In Mathematics N2, word problems are part of the curriculum and it is important for students to master them if one wants to ace that paper. Most students usually avoid this section of their Math as it can range from confusing to very confusing. The main confusing part is the Mathematical jargon that is involved.

The expression I have seen students show me during a classroom session on such problems is that of confusion, disinterest or switch of with many of them just enduring the class waiting for the bell to ring. But such must not be the case for word problems. Word problem are very challenging also to me, but I use such as a motivator to exercise my mental strength and the more I do them the better I become. Remember as the old adage goes-practice always makes perfect.

In as much as I proud myself in solving some of the complicated Math problems including word problems as far as N4, this problem somehow knocked me off but left me motivated I would say after figuring it out. This is how the question was asked:

This question without going to the nitty details of how this question needed, the main area of confusion was formulating the two equations which are then to be solved simultaneously.

You need to first let the two digit number be x and y and the number will become xy. The second  part of the statement is not that confusing and the first equation becomes:

That is what is meant when they say 2 more than.

The second statement requires you to come with the second equation in terms of x and y. The confusing part comes when it states that the digits are interchanged, meaning they change from xy to yx. Then the statement further says if the two numbers are added, leading one to add xy+yx. This is the first error I also did and fell to the examiners trap and got stuck inside there.

I tried other approaches and almost gave up on it until a switch turned on and I realised the answer was in the first statement that this two digit number has tens and units. Meaning for example if this number was 75 (remember the second digit is two less), then to get 75 it is:

This then means the original number xy becomes:

Then when this number is interchanged it becomes yx and yx becomes:

When you add these two numbers it becomes:

That was the final stroke in nailing this question and with that the remaining part is solving for the two unknowns.

You can check for the detailed method and video in how this question was solved. I will say that if I was in an exam, I would have lost lots of time trying to figure it out.

If you are solving such questions, I encourage my students to attempt the question but if it keeps getting complicated after a few tries, they must leave it and move on to other problems. This will assist in three things:

If you want to get more practice on these Mathematics N2 questions that involves word problems, you can watch these other videos: